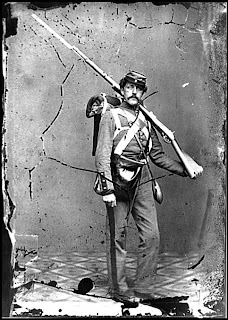 I have arrived in this country at a precipitous junction.

Not only for myself, but for the country. Having once prided myself on being accomplished in the affairs of the world - a student of politics, if not a practitioner - I feel ashamed that I know little of the recent internal upheaval here in the United States.

I know more now. I could not help but absorb it. I have wandered now, true to my vows of silence and poverty, for nearly thirty-two months. I have begged for my sustenance. I have slept in barns, alleys, and next to the smithy fire on frosty nights, to stay alive. I speak only when necessary.

But I am not alone.

The angels and the devils walk with me.

And there is danger in the air that even a foreigner, and outsider like myself, can perceive. It is the danger of a country divided against itself. I understand that territories to the south have broken away from the Union, and now the streets are absent of most young men. Though there are more dandies, then men with calloused palms. Most have gone off to fight a war that everyone seems to talk of incessantly. It fills the scraps of newspapers I pick off the streets with stories of blood and fire. It may break the back and the heart of this country if the dispirited voices around me are correct.

It has already broken many bodies.

Back from a war they limp, some broken in spirit, some with young bodies missing limbs torn brutally away, some gone so long from loved ones and families returning only to find the love and families misplaced. Some never come home at all.

I walk the roads with these men. At times there are so many of us walking through a small village that it is impossible for the kind people of the village, and they are, in large part, kind, to tell us apart and to treat us fairly. We are a mob of beggars. I heard one man shout to a friend as a group of us walked toward the center of a town that the rain clouds were approaching.

There are more of us than there are scraps of cheese and bread, to go around. And yet, at times like these, it is almost like Christ's miracle, for we all seem to put our head to pillow or rucksack with at least a mouthful of food.

Because I don't speak, these men speak to me. They know I listen because they look me in the eye, and see that I understand suffering. And yes, after thirty months of listening, the comprehension of the native tongue is much improved.

They speak to me and tell me the strange names of distant battlefields, where they've lost an eye, their courage, a friend or brother. They tell me of fear, and horror, and the stench of blood and death. And they say I cannot know. But then, they cannot know me.


And they tell me how they have been driven to this life of begging, and drunkenness by the savagery in every man's heart. I cannot debate this point, and I would not. Most of the men drink hard. I don't drink alcohol as I one did. I am left often the only man sober enough to see that others are covered against the cold.

And they tell me that life will never be what it was, and that war is not the glory of the front page.

One man, he called himself O'Connor showed me the place below his knee where his empty ragged pant leg blew like a pitiful banner in the wind.

He asked me to guess what took it.

I did not answer, and he became angry until he realized that I could not answer. So he made the answer himself.

- Cannonball. He said. Then waited for his own reply, or some sign from me that I understood.

- No. He shook his head and cackled wickedly. Not cannonball.


- He persisted in calling me son though I was surely ten years older than he.

- A knife'll leave a clean wound. A soldier keeps his knife clean. For he eats with it. No knife would take a man's leg before it took his life.

- It wasn't walking no. Nor marching. Nor horse falling upon me.

- Do you give up son? Ha, I thought so. Then you had no chance to guess it, for it was snakes.

- I was in the Carolinas. In the west, in the hills near Rocky Ford with some Union troops. Us Yanks were winning the damn war. Marching through. Taking for our Union what belonged to our Union. But this one small town, Plenitude, it was called. I'll never forget that, sure. We were in some godforsaken valley filled with men and women didn't want to give up nothing to the almighty Union.

- So, they fought us. Weren't even soldiers, really. Just old men with raggedy straw hats, and boys no more than thirteen with bare feet. And they shot our corporal right through the heart straight off. He didn't feel nothing, sure. He was holding out his hand to some old coot. Holding out his hand saying something like we were going to take this town for the Union. Old coot wouldn't take his hand, and before he could blink, a shot came from the edge of the forest on the other side of town. One minute he was standing. The next he lay in a puddle of his own blood.

- Why the rest of us scattered. We were sitting ducks. Them old hill people were marksmen. That's how they lived, hunting and such. None of us stood around to see who next they could murder. And the shots they did ring out. I saw a few more men in the platoon fall. I seen my cousin Henry dragging his leg. And I never seen my cousing Henry again.

- I ran through those woods toward the hills and climbed. I climbed over rock and boulder. I pulled myself up a narrow ledge. I dropped my rifle, and climbed some more.

- I heard the shooting continue. I heard them a-shouting like, see one there. Shoot him. Shoot him. It was horrifying. I was ascared like I hadn’t been in the whole campaign. I heard the voices of some of my friends. Boys I growed up with. They called for their mamas when them old rebs found them and shot them coldblooded. I was deathly scared. I can tell you.

- I waited until dark, and was going to crawl out, but I stuck my head through that opening and figured I'd die trying to make my way down. So I waited another day and night. By then I was hungry. Too hungry to stay any longer. So I decided to climb down in daylight.

- I made my way down slowly. Couldn't guess how I'd ever made it up. I skinnied myself off one ledge, and was lowering myself to the next, mostly by feel. I dropped my foot lower and lower. Stretched out to the full length of my arms, and couldn't feel the ledge I'd thought I'd seen down there. I stretched my leg as far as I could when I felt something hit it. I looked down over my shoulder and saw a snake, hanging from my boot. He held for a moment, then dropped off.

- Now I was hungry, and my arms were all atremble from lack of food. I couldn't pull myself back up to the ledge I was hanging from, so I had to drop to the ledge below.

- I landed hard, and when I did, two more snakes struck. They were copperheads, brown and thick as my wrist, and both of them hit my boot. I kicked one over the ledge, and as I did, the other one sprung up at me and hit, just below the knee, and just above my boot line.

- I pulled him off and sent him sailing too.

- And the doctor who took off my leg told me that if it wasn't his second strike, I'd probably be dead now too. By the time I got back to a line of bluecoats, my leg was dragging behind me, three times its normal size, purple, yellow, and it stank. I was happy, then, to have them cut it off. It was a pitiful burden to me. A source of great pain.

He hobbled away from me. As hungry as I. But satisfied in a strange way, because he unburdened himself of a story he had to tell. A story I was sure he'd tell again.

That night, three tramps were killed by local boys run wild. They killed, feeling safe in a town that rewarded them for doing good by killing off a tramp. And they thought no one would miss these lost and wandering men. But everyone is missed. I hope I am mourned when I go.

In these weeks that I tramped I saw many men die. But they were men who did not seem to mind the dying. Like my friend with the missing leg, dying seemed a relief from a life of misery. Dying meant the pain mibht stop.

I don't intend to die so quickly myself.
Posted by Ed McKeon at 6:49 PM