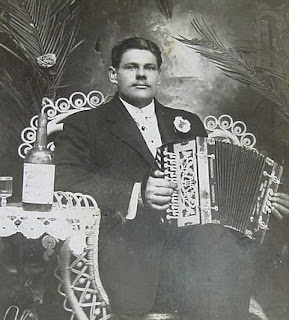 When I woke up I knew two things.

I missed seeing the old man Leatherman, and missed the chance of earning some of his luck.

I also knew that someone had hit me on the head again. I had that same miserable feeling like I was tired, but tired of sleeping. And my head throbbed.

"What day is it?" I asked the old man staring into my face.

"Wednesday of what month," I asked.

He looked puzzled, then turned toward a calendar on the wall, to check himself.

"November, still, I suspect. Was this morning when I got up."

"No, you didn't lose a single day, son. But you pretty near lost your life. See, what you done, was either durn brave, or damned stupid."

"He was brave all right."

It was McDonough's voice. I recognized it right off. His face, red and bewhiskered, leaned over my bed and into view. His voice had sounded as happy as usual, but his face talked a different language altogether.

"You was shot," I accused him.

"I was nearly shot. Seems that damn squeezebox is good for something more than music. Bullet lodged in the reed chamber. Key of A, far as I can tell."

"What about Merilee?" I asked.

He pulled his head quickly from my view and I heard the giant blast of grief he blew into his handkerchief.

"Girl is dead," the other man said. He strapped a reflector on his forehead and began pulling my eyelids apart, then stared intently into my eyes. "Bullet tore a hole in her heart."

"In mine too," McDonough sobbed in the background.

Even with a dull ache in my head, McDonough's sorrow struck me as a bit melodramatic, though I had no real reason to doubt his sincerity. He spoke as if he were standing illuminated by footlights.

"And you, my young man, are the hero of the day," the other man said.

Only now did I begin to recall what he meant. After I saw McDonough and the girl fall to the stage, I stared at them for a long, hard, terrifying moment, then looked into the audience for the man with the gun.

He was gone, but the rear doors swung back and forth, letting the sunlight play hopscotch on the back row of seats. I leapt over the edge of the stage and ran to the back of the theater. I burst through the rear doors and caught a glimpse of the man as he turned the corner in the alley, heading toward Main.

I was on him in seconds, because he was walking, calmly. He was trying hard not to attract the attention of the crowds shopping nearby. I ran with all the force I could muster and jumped on his back, throwing my arms around his neck, and then leaning back.

I knew right off that he was a strong man, for he didn't fall. In fact, he never lost stride. But he did reach around for my hair and began to pull.

That's when I started screaming. I never could abide my hair being pulled. So I screamed some more, and grabbed a hold of his face like it was a piece of cowhide I was about to scrub.

I learned, at that moment that I had some muscle, from all the cowhides I scrubbed, because he screamed near as loud as me. Then he got hold of my jacket and flipped me over his shoulder like a sack of potatoes. I hit the ground with the same kind of dull noise, too.

It knocked the wind out of me. And I fainted.

The man who was now ministering to me finished the story. Doc Gordon who was coming out of a local tavern after noontime dinner.

Doc also saw the four bricks rain from the sky. It seems he was not the only one watching the goings-on. Four bricklayers on the building above had followed my pursuit from the door of McDonough's Palace. And in the moment when the man would have ended one more life, these bricklayers dropped what was left in their hod on my assailant.

None hit the man on the head, but at least one hit his arm, and broke it, leaving the assailant on the ground next to me.

"Who was he, McDonough?" I sat up now, risking my ability to keep objects in the room in focus, and the contents of my stomach where they belonged.

"The judge won't hang him. He shot his own daughter. The judge will think Tracy was justified in ridding the town of another harlot, " McDonough countered.

“What about justice,” I said.

Both men shuffled a bit. Then the doctor spoke.

“Justice, hmmph,” he said. “You’re just a boy. You’ll find how little justice there is in this world.


There was a silence for several moments.

"I'll kill him myself," McDonough said as he burst out the door and down a flight of stairs to the street.

I jumped off the table and followed.

"Boy," Doc Gordon called after me. "I won't be responsible if you fall down dead. You'll kill yourself."

"Then the graveyards will be full today," I answered, as I hit the stairs and flew after McDonough.

I caught up with him easily, he hadn't even made it down to Court St., and he was stooped and huffing as he stumbled along.

"McDonough, it won't do you any good to kill him. The girl is gone."

"She wasn't just any girl, Jack," he looked genuinely grieved.

"What about the melodeon? Can it be fixed?"

For whatever reaon, my simple, and silly question, distracted him completely. He stood straight up. His eyes seemed to clear. He pulled a hand slowly through his long, black, curly hair, and he began to talk about the squeezebox.

As we walked, and he talked about what might be done to plug the violated chamber, I headed him away from the police station and back toward the Palace. As we passed the congregational church, the bells began to strike.

"A good carpenter can repair the face," McDonough said.

"I'll leave the shot where it is so whenever I hit that note I'll think of Merilee."

"I owe my life to that damn German squeezebox."

"Four," I shouted, looking up at the clock in the steeple.
McDonough pulled out his pocket watch and confirmed the worse.

"Four. I should've been back at the tannery before three. Goodbye McDonough. I've got a smithy to see."

The smithy's shop was closed when I got there, but I banged on the door that led into the house next to it. He answered.

"I thought you probably got tired of waiting and went back home," the smithy said to me. A napkin was tucked into his shirt top. "Your pulley wheel's in the wagon. The wagon's in the barn."

My own trip back to the tannery was not half as careful as my trip into town. And that had been reckless. By the time I reached the tannery, the horse was steaming and wet.

"Who're you racing?" McKinley asked me as he lifted the pulley wheel from the wagon with the assistance of one of the other men.

It was Ben, he walked hurriedly out of the barn.

"And Petit was here to plan for next time."

"The photographer Jack. Next time he's going to get old man Leather to pose. Maybe we can pose with him."

"Only if it will bring me better luck."

It was then that I told Ben and Mr. McKinley about my afternoon in town. Mr. McKinley drove me home to his house that night, and had Mrs. McKinley, who smelled like a cinnamon stick, check the bump on my head.

We ate a roast that had been cooking all that day. The meat was tasty and seemed to melt in my mouth. That night I was sent to sleep in a bed so soft that I couldn't readily get to sleep for fear I might drown. At some point I dozed off and I must have rolled off the bed and onto the floor, for that's where I found myself when I woke in the morning.
Posted by Ed McKeon at 3:46 AM