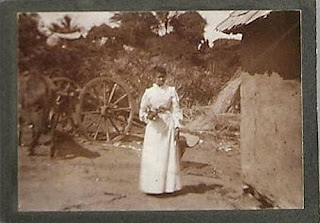 At the Fisher Farm today my emotions overtook me.

I approached the farm from over the hills in Middlefield. I saw some activity in the small grass plot in front of the large house. The house sat close to the edge of the wide stage road called Washington Street since, I am told, thought I don’t ask, General Washington marched his troops down the wide corridor. A path off the road led to a shelter I had on the mountain that looked, to the West, over Meriden.

As I approached, I saw that the husband was back from the fields, the grown children, four boys, as well, and the wife, and some of the other hands stood in a group talking, or lolled on the porch that skirted the front and side of the house.

For a moment I thought they were waiting for me, and I was prepared to turn away, and rely on what I carried away from breakfast in my pack instead of facing the crowd. And as I thought this, I saw all attention was focused upon me, and slowly the crowd dispersed, leaving only the husband and wife, another woman, and a child. As I moved closer, I peered from under the brim of my hat and saw someone I recognized.

I knew her name was Emma, and I had not seen her for many years, though the exact number of years is cloudy in my thoughts. She was a negro servant when I knew her, in her teens, moving into womanhood, and was treated as a member of the family in the Fisher household. One of her jobs was to feed me.

I grew to love her, in a fashion. For she never served me without speaking to me, without stopping a one-sided conversation, from the time she set the food down, until the time I mopped the last bit of gravy from my plate. After which she would always wrap me a thick sandwich made from bread heels and meat scraps.

She spoke with irreverence, and in this she reminded me of my Marie. No thought to age, class, or status. She spoke her mind. Told me I was dirty. She told me once that I stank, and so from that point, before each visit, I soaked in a creek when the weather was warm. She told me all about the family that she lived with, and she told me the gossip of the house, the town, the state, and the country.

Mrs. Fisher taught her to read, and so she kept up on events by reading the newspapers, and kept up on the gossip by keeping her sharp ears open, and her mouth closed, except when she was with me. I believed I was the only one she spoke to this way, because she knew I would not reveal a single secret.

She told me of her ambitions. She told me how she would love to study inside Wesleyan's walls, but feared that she would never have the chance. She told me she wanted a family, because she missed her own. They lived in a town called Oakley, in a place she only referred to as the South.

And she told me that she understood how I felt to be someone wandering on the outskirts of a society that was not mine to call my own, for she felt the same way.

And finally, she told me when she was leaving, to be married to a young farmer named Sanders. And she wept copiously. As I did walking away from the Fisher farm that last time I saw her.

Here was Emma standing, waiting, hands resting on hips cocked to the left. A huge grin illuminating the face of this girl with a woman's figure. And before her, a child, skin a lustrous cocoa, hair raven, and beaming the way her mother beamed. I felt my eyes must be lying to me.

As I got closer, I knew my eyes were telling the truth. It was not a vision. This was Emma, my Emma, and what must be her daughter.

"Why old man," I heard her laugh. "In all these years you never learned to walk any faster. Aren't you glad to see your Emma."

I don't know if I smiled. My heart smiled. My soul smiled. My face could do nothing but follow, but I forgot what a smile could feel like, and so I was not sure what contortion my face had taken upon itself to perform.

"Well, look here," she laughed again. "You learned something, didn't you? You're smiling."

I turned my face to the earth, ashamed at the betrayal of my own vows, but I had to admit, sinfully it seemed, that I felt more joy in this moment than I had felt in many years.

When I reached the small knot of people, Mr. and Mrs. Fisher backed off, leaving me looking at the earth, and at the feet of Emma. As if she had glided there on a sheet of ice, the little girl slid into my view. She looked up at a face that I knew contained the lie of a grimace.

"I tell her about you all the time," Emma said.

I looked up furtively, not wanting the secrets of my soul to be discovered. She was smiling, gently, with an understanding that didn't need explanation.

I knelt, and put my pack and stick on the ground and reached out slowly toward Alice. I was unsure of myself. I had not reached out for another person in a longer time than I had smiled last. She seemed timid at my faltering reach. But when I placed my hands on her shoulders, though my fingers trembled under the weight of years of abandoned emotion. She relaxed, and seemed to spread her confidence through my fingers.

She smiled a smile I will never forget. It came quickly, from nowhere, like a swallow on the hunt, and it was as broad as the rivers I couldn't cross, and it carried the warmth of the summer sun, though there were gaps where her small children's teeth had fallen victim to a piece of taffy, or an apple. She smiled, and looked at me with a child's innocent coyness. And I thought of my meals with Emma, and I thought of Marie. And I pulled the child to me and held her tight, and wept as I heard the lighter than air laughter escape from her perfect mouth. And I wept like a man who had lost his mother.

The little girl pulled away, and I let her run. I folded my face into my hands and tried to hide my sorrow from those few who had gathered. I felt a hand on my shoulder, and having gained my composure, I looked up to see Emma smiling back at me.

With this reassurance, I almost fled. It is the course I have learned to take. No longer a predator in life. I was now scavenger, and sometimes prey. It meant that I could not show vulnerability. Could not afford to expose any weaknesses to those who might see them as excuses for abandoning their kind treatment of me. I knew that to survive I had to run when threatened. I was compelled to run.

But at this moment. The first such moment in many years, I knew I did not have to run, did not want to run, and in the end, would not run. I would stand and share these small emotions with this woman who shared her’s with me so many times, and share with these people who shared their labors, and the food from the table with me for so many years.

Emma took me by the arm and led me toward the porch. Mrs. Fisher hurried ahead. And Alice ran ahead with Mr. Fisher. Emma spoke softly to me, but she could not resist speaking.

"Any man with a life as hard as your own deserves to weep a river of tears. I've wept them myself, I know. A lot has happened since we met last. Mr. Sanders, my husband, Ernest, has taken a job with the New Haven railroad. We own a piece of land near Bridgeport. And I've learned to read."

She spoke to me thus, through my meal, and for the hour it took for me to reach the hill that lead up to the Insane Asylum. And we both wept when we parted again.
Posted by Ed McKeon at 6:24 PM