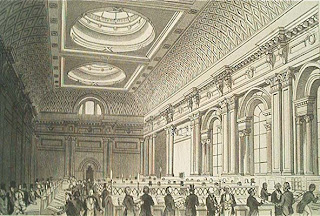 In September of 1856, Marie and I had been married for three months, yet we both lived separately in our parent's houses. By this time she let her aunt in on our secret, and Agetthe abandoned kitchen, hearth and bed so that our marriage would not go unconsummated. Where Agetthe disappeard to was never revealed, and I was wont to question lest our luck change, but her accomodating ease led me to believe that we had somehow infected her and she had found a love of her own.

Those stolen evenings with Marie were the finest times I have known on this earth. We lay with an early Autumn breeze rolling through the window. We were warmed only by each other, and we found it to be heat enough.
"We can't live like this forever, my love," I said stroking the brown ringlets on her head that seemed to curl naturally around my fingers. "I must be man enough to risk my fortune."

"I'm but a poor girl, Jules. And I for one would hate to lose a fortune for something as silly as love," she laughed.

I took her seriously.

"It isn't silly Marie. We are man and wife. We are adults and we continue to act like children," I said.

"It is only children who are truly happy," she said. " We have plenty of time to grow up."

With that she tangled me in the cool sheets and kissed me so that I was warmed like a slice of spring.

"Of course we must live up to our responsibilities," she reasoned. "But for now your duty is to love me."

"Fool," he scolded. "You don't know what you have thrown away."

"She won't be a part of this family," He insisted.

¬ "She will always be my wife."

"She will not live here," he shouted.

"But she will live with me," I replied calmly.

"You have made your choice my son?"

"Father. I love you. I will always love you, even when I am so angry with your stubborn nature that I could roll you into a tanning vat. But I love Marie, and I will always love her too. In a way that I can only call upon you to remember. I have made a choice, yes. But it is not between you and she. It is between fear and reason. Between childishness and growing up. I have chosen her, but I won't abandon her."

"When you married her, you orphaned yourself," he snapped.

I felt tears come to my eyes, and my father saw them as well, but he turned his back on me.

"I have not chosen, Father. You have. I love you," I told him as I left the room.

I joined Marie outside in the carriage and we drove to her home to tell her father. He was not nearly as angry at first as when Marie told him that I had been disinherited, then he flew into a rage. But after a few minutes of fury, the shouting stopped, and a few minutes after that he approached my carriage with a glass of strong wine in his hand.

"Let us drink to your marriage. And to love," he said, handing me the glass. We drank together, and he pulled me from the carriage and through his front door where we drank and celebrated our new family all night.

I went to work for him the next morning.

I begged him to let me start at the lowest position, but he would hear none of it. He wanted me to start at the top of his tiny ragbag company. He could think of no better wedding gift for his son-in-law.

"Make me what your father is," he demanded.

"Rich," he replied. "We are both merchants of skins, but he lives in a mansion while I live in a hovel."

It was true, they were in the same trade, yet this man dealt on such a small scale that he could not imagine how my father bought ship loads of skins from all over the world. From the Americas, from Africa. These things seemed simple to me, and all we needed was money. "I will go to the banks," I announced.

"The banks. No banks. They are thieves. I will not have their money."

"You could not have their money. They would not lend money to you because they don't know who you are. But they know me. They'll lend me plenty, and we'll pay them back easily the first shipload we take in."

It was a simple scheme to me. I performed the task many times for my father, but it took me weeks before I could dress Monsieur Brillard in a business suit of clothes, such as he had, and dragged him to the bank, where they made us a loan for a shipload of African hides in a matter of minutes.

"Is that how the rich get money?" he asked, stunned as we left the bank.

"The rich only use the money like the carpenter uses his tools, to make more things. The banks loan them money because they know the rich can handle these tools. You wouldn't let a banker build you a barn, would you?"

He shook his head.

"And you wouldn't let a carpenter have your money," I concluded.

He was even more amazed when the ship pulled into port with the skins, and we paid the shippers, then processed the skins and made twice the money back.

"Let's buy two boats full this time," I suggested. And after a week of deliberation he relented, and we had two shiploads of leather on the docks within a month, earning four times our original investment.

"Now we return the money to the bank?" he asked.

"We don't return it until they ask for it. You see, we have to pay the interest we promised if we return it today, or we return it at the end of the year. So we will keep using it to make more money."

And we did. We moved out of the house on poverty row, and purchased a large house on the Rue de Poivre. It had enough rooms to comfortably accommodate, Marie and I and her father and her aunt. Big enough so that some days we didn't even see one another. The new surroundings were easy for me to adjust to, but difficult for Marie and her family. They would not allow me to hire a cook or a chambermaid, and busied themselves keeping the surfaces of every table in the house spotless.

It was at this time that I heard from my father again. He wanted a meeting, and my heart quickened. He wanted me to bring Monsiuer Brillard along.

The meeting was set at my father's place of business, and when we entered the room we saw that my father had his foreman in attendance.

My father shook hands stiffly with Monsieur Brillard. My father's foreman, Guy Ste. Pierre, who had known me since I was a child, embraced me warmly. My father ignored me.

"Monsieur Brillard," my father began. "We have noticed that you no longer sell your skins to us for processing."

"That is correct," he acknowledged.

"And we have further understood that you have begun selling whole skins, of high quality, and finished goods, to merchants in the East of the country."

"This is true as well," Brillard said.

"As you know," my father continued. "Until now we have been the only company in Lyon who have sold high quality skins and finished products to Eastern merchants. But we welcome the competition. However, we feel that by working together we could conquer not only Eastern France, but many of the other countries in Europe as well."

"What I am offering," my father said, breaking the silence. "Is to buy your company from you for forty-five thousand francs."

"I do not own the building," Monsieur Brillard declared, somewhat surprised. "Only the skins."

"A business is composed of goods and customers," I interjected. "That is what my father proposes to buy from you."

My father smiled at Monsieur Brillard, but did not yet acknowledge my presence.

"My suggestion, sir," I continued. "Is to politely decline the offer. Though I can think of nothing more endearing than to be able to work together with my father, and my father-in-law. I do not think such a thing will come to pass. In addition, I can guarantee you that if my father is offering you forty-five thousand francs for this business, then it is indeed worth ninety thousand."

My father scowled. He paused a few moments to let the venom of his look sink in, and at this moment I allowed myself to wonder for the first time how I could continue to love a man who had so little forgiveness in his heart.

"This man, my son, my former son, would delude you Monsieur Brillard," my father coughed. "Right now, your business is worth something. In a few months, who knows? It could be worth pennies. It could be worth less than when you started."

Monsieur Brillard laughed, and I laughed inside.

"How could this be so, Monsieur?" Brillard asked. "I have sold eight shiploads of skins without the slightest effort. If I have bitten into your business at all, I am sorry. But I think I have not. There is room in Lyon, in France for two fine leather merchants. I have no fear of failure. After all, you have been the teacher for my partner."

"Pah. He has been in the business but a few years," my father's face was as cold as a day in January, but his eyes glowed like steel in the forge. "What does he know. What he doesn't, I won't tell you. But this, like any business, has its seasons. If you know not when the winter comes, you'll find yourself frozen."

With this he got up from his seat stiffly and crossed the room slowly. He could not let us think that we were driving him out. At the door he turned and faced us.

"When you are cold, I will throw you a blanket. But you'll have to go to the nunnery to get a scrap of bread."