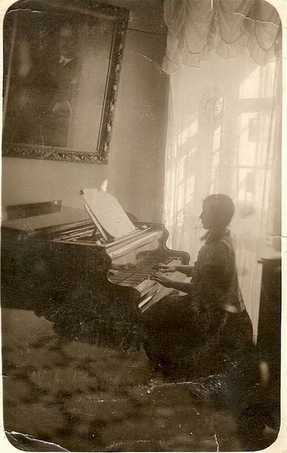 After I dropped the boy on the postmaster's step, I knocked, and I ran into the alley.  I had no fear of the postmaster, for although he was bombastic, and thought highly of himself, he was harmless.   That is, he never appeared as if he would bring any harm to me.

When I was satisfied that the boy would be taken inside, and not mistaken for some ordinary drunk, I left.  I still do not know what the boy wants.  He has followed me in as nearly a complete circuit as I have known any man to do, and I will say, with some dismay, that I will miss his company.  Though he kept his distance, he was, nevertheless, a companion, who shared a common road, a common plot of earth to sleep upon.

Today, as I passed through Berlin, I meet the young girl on Worthington Ridge who greets me each journey with a bag of cookies.  As always, I sat by the tree outside of her house as she went in to play the piano.  Though her playing is inexpert, she chooses songs, for the most part, that are not too difficult, and make for a pleasant diversion as I eat the sugary cookies she has prepared for me.
Today, she emerged before I was finished.  She walked right up to me.

"I have you figured out," she said.

I lowered my gaze to her shoes.

"I know where you are from," she said.

Again, I avoided meeting her gaze.

"You are an eskimo," she cried with delight. "From the Yukon, above the Arctic Circle.  I can tell by your features, and your burnished skin, just as it says in my crestomathy."

I could not help myself, and I smiled.  And because she was a child, and because I loved her cookies and her piano playing I raised my head and smiled directly at her.

She was startled, but pleased.  My smile, no doubt, is imperfect.  I no longer have all my teeth, and those I retain grow at wild angles.

"I knew I was right," she said running to her house calling for her mother.

After I finished my cookies I walked off the road, through a kind of alley that ran between stables and barns and sheds and outhouses along this good long, wealthy, abundant road.

There was at least one ash pile where I regularly found half-spent cigars, of good quality, that I could shred later at my shelter, and use to fill my pipe more than once.

This vice, this smoking, begins to worry me.  At the spot in my mouth where this old tin pipe rests, I've begun to feel a sensation like that of a fever blister.  The skin is somewhat reddened, but because it is tough as my coat from the sun and the wind, I cannot feel any difference in its texture.  It is a sensation that does not leave me, and it is one that pains me more when I hold the pipe.

I've begun to hang the pipe from the other side of my mouth, though it is not as natural, I find I can still draw a cloud of smoke properly, which calms me nearly as much as singing a hymn.

God knew what he was about when he created tobacco.

As I walked into the hills, I notice that the tops of the trees were beginning to carry the burnt flags of autumn.  A short respite from the treachery of the heat, and soon the battle with the cold would begin.  Spring and Fall were my Purgatories between Hell and Hell.

"Life is not made for happiness," Hamid had once told me.  "The only ones that can be happy in life are simpletons and sinners."